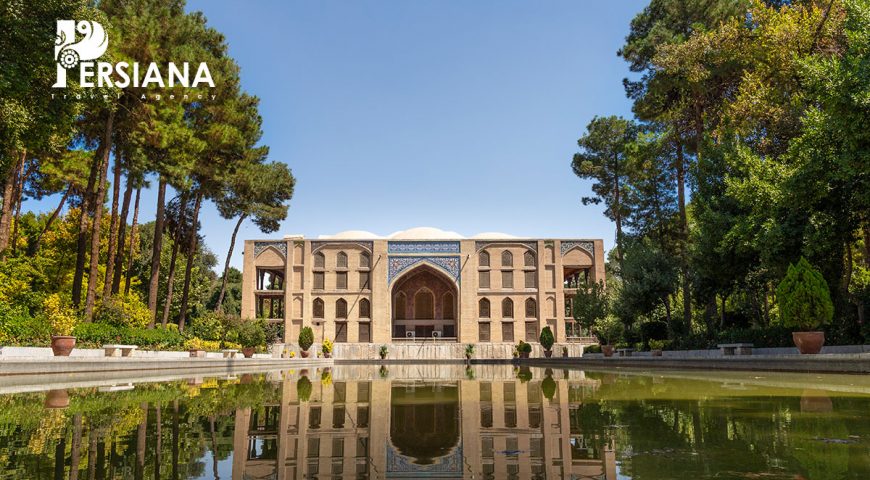 Isfahan is famous for being an artistic and historical city. One of its most visited and popular attractions is Chehel Sotun Palace. The meaning of its name is a palace with 40 columns. In Chehel sotun palace there is a pool, veranda, and several halls. Its wonderful architecture leaves everyone in wonder and appreciation

Chehel Sotoun Palace and its royal garden are one of the ancient sites of Isfahan. The Chehel sotun meaning is “Forty Columns” in Persian, was inspired by the twenty slender wooden pillars supporting the entrance pavilion, which, when reflected in the waters of the fountain, are said to appear to be forty. The time of construction of the Chehel sotun or forty-column palace dates back to the time of Shah Abbas the Great in 1588. When Isfahan became the capital of Iran, different and huge projects were implemented in this historical city. The construction of a street called Chaharbagh and the gardens around it was one of these plans. Chehel sotun Garden was one of the most important of these gardens, and in fact, it connected other gardens and connected this street to Naqsh-e Jahan Square.

During the reign of Shah Abbas, the Great, under his command, a mansion or pavilion was built for foreign and domestic guests. This pavilion was the original core of the Chehel sotun palace. When Shah Abbas II came to power, this simple palace was expanded and several halls were added, such as the Hall of Eighteen Pillars, the Mirror, and the luxurious and large rooms.

The new mansion was decorated with the help of various Iranian arts such as mirror work, painting, tile work and Mogharnas work and became the title of the happiest building in the world. A beautiful pool was built in front of the Chehel sotun palace and doubled the beauty of the palace. The construction of the Chehel sotun Palace was completed in 1057 AH and was inaugurated in the presence of foreign and domestic guests and the Shah. Chehel Sotun Palace was registered on the UNESCO Cultural Heritage list in 2011.

The Chehel sotun palace has twenty columns and seems to be famous for its forty columns due to the reflection of the columns in the water. The land of Chehel Sotun Palace is 67000 square meters. Its design was inspired by Chinese, Iranian, and European architecture. If you travel to Isfahan to visit the Chehel sotun Palace, a large porch with a length of 38 meters and a width of 17 meters will attract your attention. This porch is on the east side of the Chehel sotun palace and has 18 wooden columns 14 meters high made of sycamore and pine wood. The top of each column is decorated with Mogharnas.

The four middle pillars are located on four beautifully carved stone lions. The stone lions are fountains that direct water into the marble pool between these four pillars. The roof of the porch is very spectacular in chehelsotun palace. The roof is made of wood and is artistically decorated with porcelain knots, paintings and mirrors. There are two columns at the end of the porch, 12 meters high, which overlook the Hall of Mirrors.

This is one of the most important parts of Chehel Soton mansion. Ashraf Hall or the main hall with beautiful paintings of the Safavid period is very spectacular and amazing. Inlaid and adorable windows are located on the western, southern and northern sides of Ashraf Hall in Chehel sotun palace.

These windows overlook the pond in front of the Chehel sotun palace and the garden space, and a place for light to pass into the hall.In Ashraf Hall, six oil paintings can be seen, which are reminiscent of the feast of Shah Abbas, the battle of Chaldoran, Shah Tahmasb and the reception of the Shah of India, the battle of Nader Shah with India, the battle of Shah Ismail with Shibak Uzbek and the reception of Shah Abbas with Vali Mohammad Khan. They show the art of painting in Isfahan.Along with these amazing paintings, there are also pictures of celebrations of kings and foreign ambassadors. Three domes are decorated with gold ornaments and amazing paintings.

Isfahan Chehel sotun Garden has an area of ​​more than sixty seven thousand square meters and Chehel Sotun Palace is located in the middle of it with an area of ​​2,000 square meters. layout of the garden in Chehel sotun palace is of course, Chahar Bagh pattern which has been globally understood as the main lay out of the Iranian garden. This garden has a geometric pattern that symbolizes the Islamic-Iranian quaternary. The Chehel Sotun Palace is among the 9 Iranian Gardens which are collectively registered as one of the Iran’s 23 registered World Heritage Sites under the name of the Persian Garden

Chehel sotun palace, which belongs to the Safavid era, was turned into the Chehel sotun Museum in Isfahan in October 1958 with the presence of a group of great men of science and art. Chehel sotun museum now hosts manuscripts and historical manuscripts, decorative vessels, carpets, rugs, pottery and porcelain. At the entrance of the Chehel sotun Palace, there is a hall which is dedicated to the museum and it contains the historical objects of the Safavid and Qajar periods such as potteries and glasses from the third to the eleventh centuries AH, white and blue porcelain made by Shah Abbas, old manuscripts, rugs with an altar design from the 11th century AH, and inlaid and inlaid wooden doors belonging to Safavid era. Objects that are stored in Chehel sotun palace are mentioned bellow:·       Collection of pottery and tile works·

The attractive Safavid architecture and world heritage sites have made Isfahan province a popular destination for both Iranian and international tourists. Although the Chehel sotun fired during the reign of Sultan Hussein Safavid and suffered serious damage during the Qajar period, it endured and after many years, Chehel sotun palace is still a magnificent ancient monument in Isfahan that many tourists and tourists come to Isfahan to see the masterpiece of Iranian art up close.