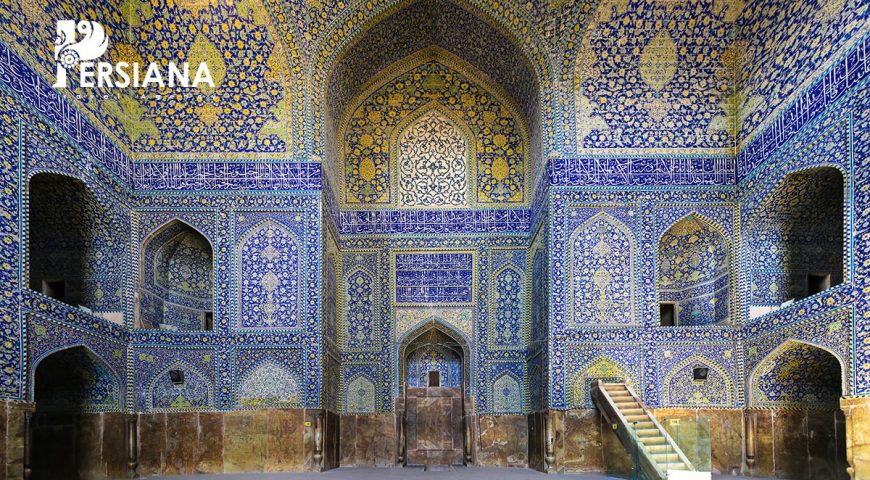 The Shah Mosque, which is also known as Jame Mosque, Soltani Mosque and Imam Mosque, is one of the mosques of Naqsh-e Jahan square which was built during the Safavid period and is considered as one of the most important buildings of Islamic architecture in Iran. Shah Mosque is an eternal masterpiece of architecture and tiling in the 11th century AH.

History of the Shah Mosque

Since the Shah Mosque was built by order of Shah Abbas I of Safavid dynasty, this mosque was named by the Shah. The Shah Mosque is considered as one of the masterpieces of its time in the eleventh century AH in terms of architecture, tiling, carpentry, sculpture, type and number of decorations used. The main decorations of this historical mosque are tiles made with mosaic art and seven color.

The construction of the Shah Mosque or the Imam Mosque began during the reign of Shah Abbas on 1019 AH on the occasion of the twenty-fourth year of her reign and was completed in 1038 during the reign of Shah Safi. In fact, according to the dates recorded in the corner next to the building, it is clear that the decorations and extensions of the mosque were completed during the reign of Shah Abbas’ successors. An inscription that is installed below the first inscription on the entrance of the mosque, indicates that the Abbasi Grand Mosque is the work of the famous architect of the time Ali Akbar Isfahani and Master Moheb Ali Beykollah is introduced as the supervisor of the construction of the Shah Mosque.

The famous inscriptions of Shah Mosque were also the art of famous calligraphers such as Alireza Abbasi, Abdolbaqi Tabrizi, Mohammad Saleh Emami and Mohammad Reza Emami. Shah Mosque of Isfahan was registered in the list of national monuments of Iran in January 1941 and also is registered as one of the buildings of Naghsh-e Jahan Square in Isfahan in the UNESCO World Heritage.

The architecture of the Shah Mosque

During the Safavid period, two schools were established on both sides of the Shah Mosque, one of which was called the Sulaimaniyeh School and the other one was called Naseriyeh which was renovated during the reign of Nasser al-Din Shah.

Why the Shah Mosque is unique?

It is interesting to know that the square is inclined to the south, but the Shah Mosque is inclined to the southwest. The Shah Mosque is built of 18 million pieces of bricks and 474,000 tiles. Marble is also found in abundance in this building. The height of the minarets of the mosque is approximately 33 meters, while the minarets that are located above the nave of the mosque are even taller. In the entrance part, two frames have been made that represent the design of the prayer rug.

The decorative surfaces used in Shah Mosque are known as the most important architectural pillars. Architects have used other artistic roles to decorate and beautify them, as the use of images of people and personalities has not been allowed in mosques. The method that has been chosen for the tiles of this mosque is the new method of seven colors. Also, calligraphy, masonry and inlays have multiplied beauty of this work.

The chambers and porches

The Shah Mosque of Isfahan has two symmetrical chambers on both sides of its north and south porches, which are located on both sides of the dome. The eastern chamber is larger than the western one but it is simpler and unadorned. Moreover, the smaller western chamber of Shah Mosque is adorned with seven-tone tiles. The altar of this chamber is one of the most beautiful altars among the mosques of Isfahan.

The northern courtyard of Shah Mosque, with its two large openings and entrances on both sides, is connected to the chambers, which were adorned with exquisite inscriptions and unique tiles. The upper floor also has rooms that were the residence of scholars and jurists of religious sciences during the Safavid rule.

The south porch of Shah Mosque is decorated with two large chambers with arrays, which are a perfect example of the art of architects of the tenth and eleventh centuries AH. The porch, which is covered with five arches and seven slopes, is one of the most beautiful porches in Iran. The height of this porch, which is surrounded by two minarets, is about 33 meters. The 48-meter minarets on both sides of the porch are decorated with beautiful tiles, and the holy names of Muhammad and Ali can be seen with Kufic lines on their bodies.

The Shah Mosque of Isfahan is a must-see monument of Iran that visitors should
not miss it. Shah Mosque has a wonderful and eye-catching architecture and art
with great innovations. Persiana Travel and Tourism Agency highly suggest you to
visit this historical mosque.