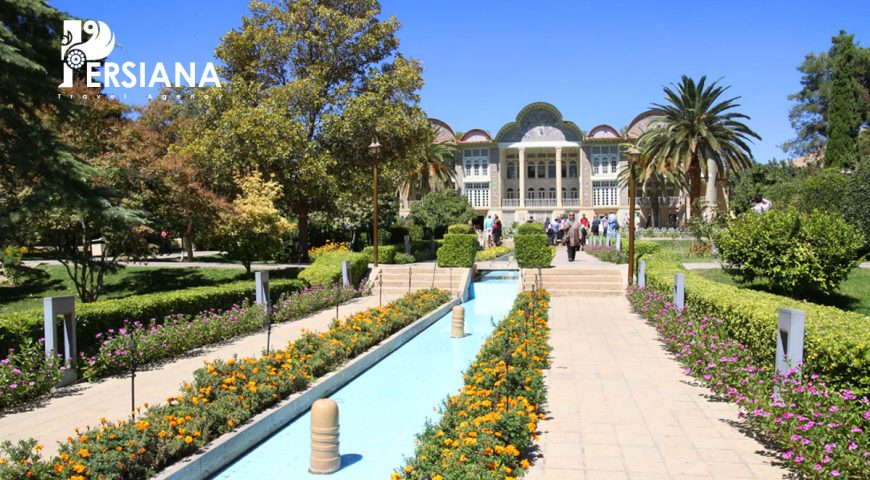 Eram Garden is one of the most beautiful gardens in Iran which is a botanical garden at Shiraz University. Stay tuned with Persiana Travel and Tourism Agency as there are so many unknowns about Eram Garden that you should know before visiting.

Eram Garden is a beautiful and lush garden located in the northwest of Shiraz, which attracts many domestic and foreign tourists every year. If we look at the Eram Garden from above, it is like a rectangle garden which area has changed in different periods of time, but today it is close to 110,000 square meters. The main sidewalk, which starts in front of the main pool and extends to the end of the Eram Garden, is decorated with a long stream in the middle and beautiful flowers on the both side of it.

Around the sidewalk of Eram Garden, there is a wider walkway, which is surrounded by towering cypress trees. The main pool of Eram Garden has an area of ​​more than 300 meters, which reflects the image of the mansion and beautiful palm trees, giving a stunning view to its visitors. Due to the slope of Eram Garden, there are steps that make the sound of water throughout Eram Garden.

You can walk for hours away from the hustle and bustle of the city and any worries on the sidewalks of Eram Garden and enjoy the pleasant weather and its diverse plant species. There are many different species of trees in Eram Garden of Shiraz, such as cypress, pine, maple, willow and orange trees, the smell of which makes the tourists feel alive in the spring. In addition, you can see a variety of ornamental shrubs, flowers and shrubs throughout Eram Garden. Eram Garden was included in the list of national monuments of Iran in 1974 due to its unique architectural effects. It is interesting to know that Eram Garden of Shiraz is one of the 9 gardens that were finally included in the UNESCO World Heritage List in July 2011.

Although the exact date of Eram Garden’s construction and early is not known, according to the descriptions in the travelogues of the 10th and 11th centuries AH shows that the historical date of Eram Garden dates back to the time of the Seljuks and Al-Inju. Eram Garden has seen different events at different times. During the time of Karim Khan Zand, Eram Garden was improved and rebuilt. In Qajar period, Nasser al-Din Shah built a mansion on Eram Garden, but after that it was a place for the leaders of the Qashqai tribe for 75 years.

In the early Qajar period, the former owners of Eram Garden, some of whom were elders of the Qashqai tribe, were buried in a part of this garden, but its exact location is still unknown. Main building of Eram Garden was built by the first Qashqai Ilkhan and his son Mohammad Qoli Khan during the reign of Fath Ali Shah Qajar. During the reign of Nasser al-Din Shah, Haj Nasir al-Mulk Shirazi bought Eram Garden and built a mansion in it based on the main building of the garden, which is the same building that you could see now Eram Garden. 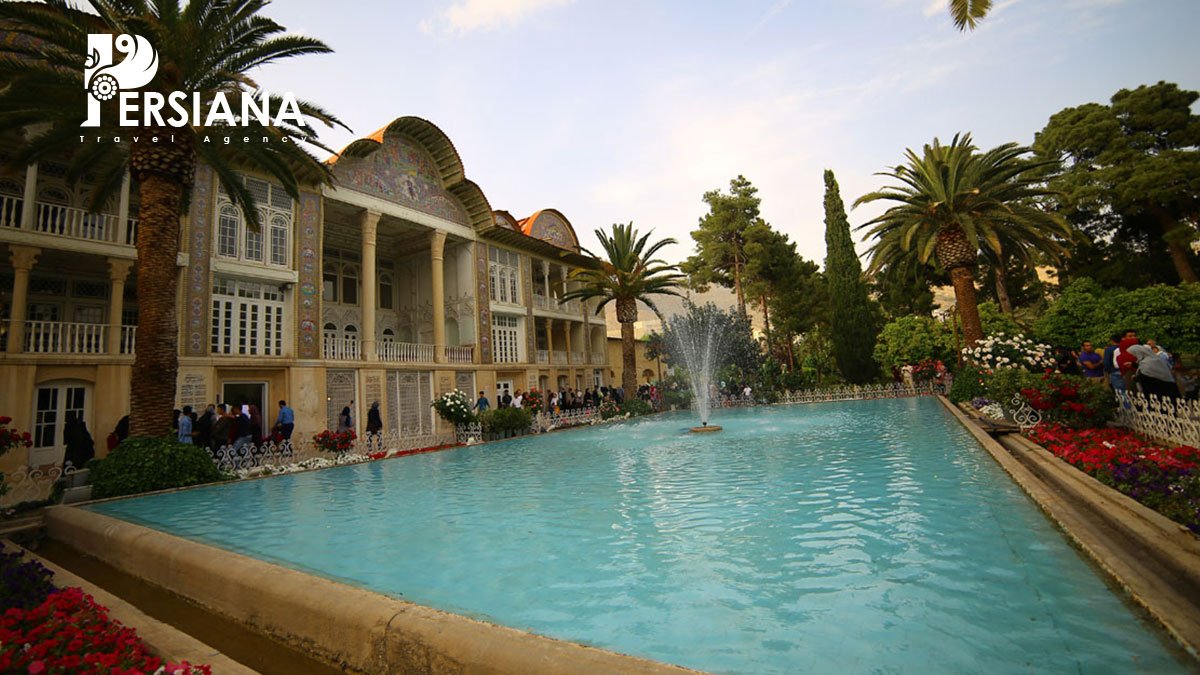 Eram Garden of Shiraz is built on a rectangular land with an area of ​​110,000 square meters. The entrance doors of the garden are on the larger side, to the north and to the “Eram Boulevard” and the smaller side is to the west and “Jam-e Jam Boulevard”. Eram Garden of Shiraz has a very high plant diversity and plants from many different parts of the world have been planted in this garden, making it a museum and exhibition site of various flowers and plants, some of which you may not have seen before.

Eram Garden is covered with ornamental trees, cypress and citrus trees, as well as a variety of decorative flowers. Hundreds of centuries-old lofty, citrus trees, a large pond in front of the mansion, as well as a three-story mansion with amazing arches are some of the first things you will see when you enter this Eram Garden. One of the most beautiful and remarkable parts of Eram Garden is the passageway that extends from east to west. As soon as you enter the Eram Garden from the main entrance, this passageway will appear on your left.

Both sides of this passageway of Eram Garden are covered with magnificent cypress trees that are several hundred years old. Eram Garden has a slope from east to west and its main building is located on a hill and the slope of the land is paved with class waterways and stairs that compensate for the difference in height of the passages. The combination of these waterways and stepped passages doubles the beauty of Eram Garden. The main and wide passageway of Eram Garden leads you to the main building. At first, you will see a large rectangular pond decorated with a water feature in front of the mansion of Eram Garden. In every corner of this pond, there is a magnificent Phoenix palm tree. 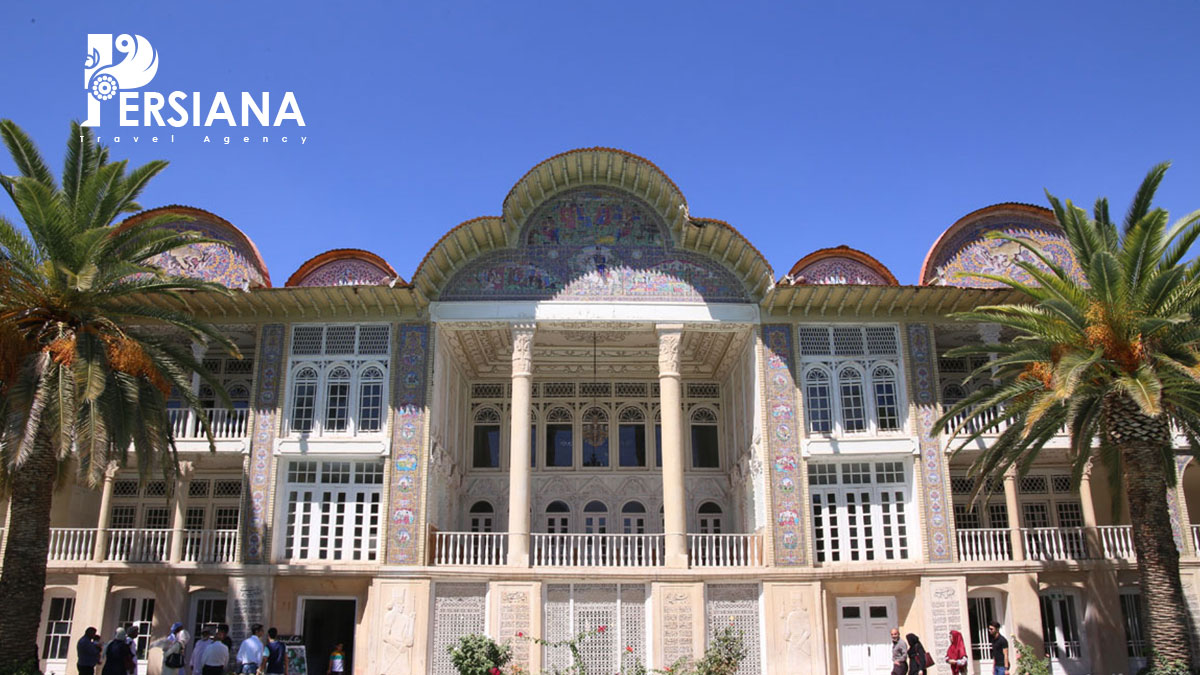 The Eram Garden mansion is located at the top of the garden slope which is three-story mansion with two magnificent columns inspired by the columns of Persepolis and is famous for its circular arches. Eram Garden mansion is one of the most characteristic mansions of the Qajar period because it has unique paintings, bedding, carvings and tiles. The mansion of Eram Garden was inspired by the architectural style of the Zand and Safavid eras. The ground floor of the mansion is like cellar that was intended for hot summer days.

Most of the wooden doors of Eram Garden are made of teak wood so, over the years, they have remained intact and have maintained their overall shape. In general, Eram Garden mansion is the remarkable example of Qajar period art in terms of oil paintings, exquisite wooden doors and inlays, iron lattice windows, stone plinth, muqarnas and plaster and facade tiles, the front of the mansion and its stone columns are.

One of the memories of traveling to Shiraz is a tour in Eram Garden. Seeing some photos of Eram Garden in Shiraz is enough to tempt you to visit this masterpiece. If you are interested in visiting this attraction, check out different tours of Persian Travel and Tourism Agency to Shiraz.