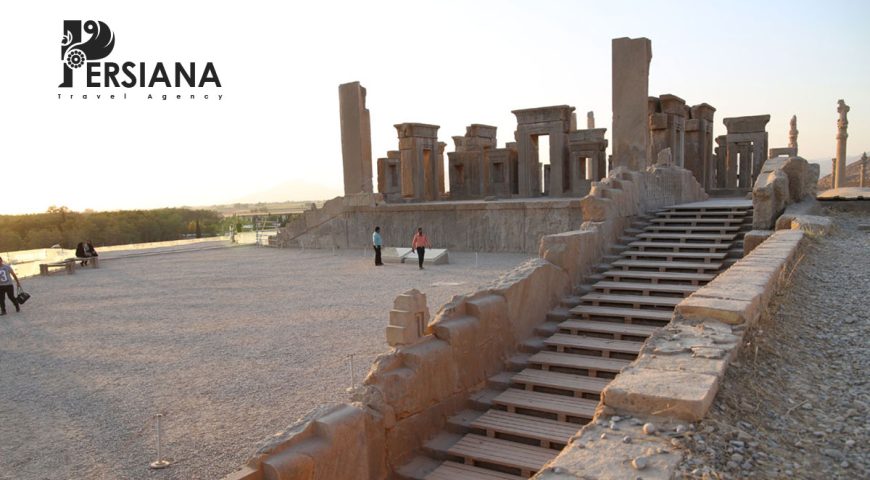 Persepolis is the name of one of the ancient cities of Iran in city of Marvdasht, Fars’s province, which was founded by Darius the Great (522-486 BCE). The city was expanded for many years by other Achaemenid kings such as Xerxes and Artaxerxes I and was for many years the glorious and a spring/summer royal residence and seems to have been intended as a ceremonial center where representatives of subject states came to pay respects to the king of Achaemenid Empire. Before starting the historical journey to Persepolis, Persiana Travel and Tourism Agency gives you a brief introduction of this attraction.

In the heart of Persia, somewhere 10 km north of Marvdasht and 60 km northeast of Shiraz, is a civilized land of glorious Achaemenid history, which has as much to say about the history of the Achaemenid dynasty. The earliest remains of Persepolis date back to 515 BCE and it exemplifies the Achaemenid style of architecture. UNESCO declared the ruins of Persepolis a World Heritage Site in 1979.

The ancient city of Persepolis or Persepolis was the capital of the Achaemenid Empire and many palaces in Persepolis show off the grandeur of ancient history. Persepolis (Old Persian: Parsa, New Persian: Takht-e Jamshid or Parseh) literal meaning “city of Persians”, was a place for the glory and ceremonies of the New Year celebrations of Achaemenid politicians and showed a beautiful historical image of Iran. André Godard, the French archaeologist who excavated Persepolis in the early 1930s, believed that it was Cyrus the Great (Kūrosh) who chose the site of Persepolis, but that it was Darius I who built the terrace and the great palaces.

Persepolis is about 125,000 square meters with numerous bas-reliefs and comprise of nine structures: The Apadana (hypostyle receiving hall, Tachar palace (Palace of Darius I), Council Hall, Treasury, 100 columns palace, Hadish palace (Palace of Xerxes I), palace of the queen, Gate of All Nations, Unfinished Gate and Tomb of the two Kings. Darius ordered the construction of the Apadana Palace and the Council Hall, the main imperial Treasury and its surroundings in Persepolis. These were completed during the reign of his son, King Xerxes. Further construction of the Persepolis continued until the downfall of the Achaemenid dynasty. The whole construction of Persepolis took about 180 years.

The name of Persepolis throughout history 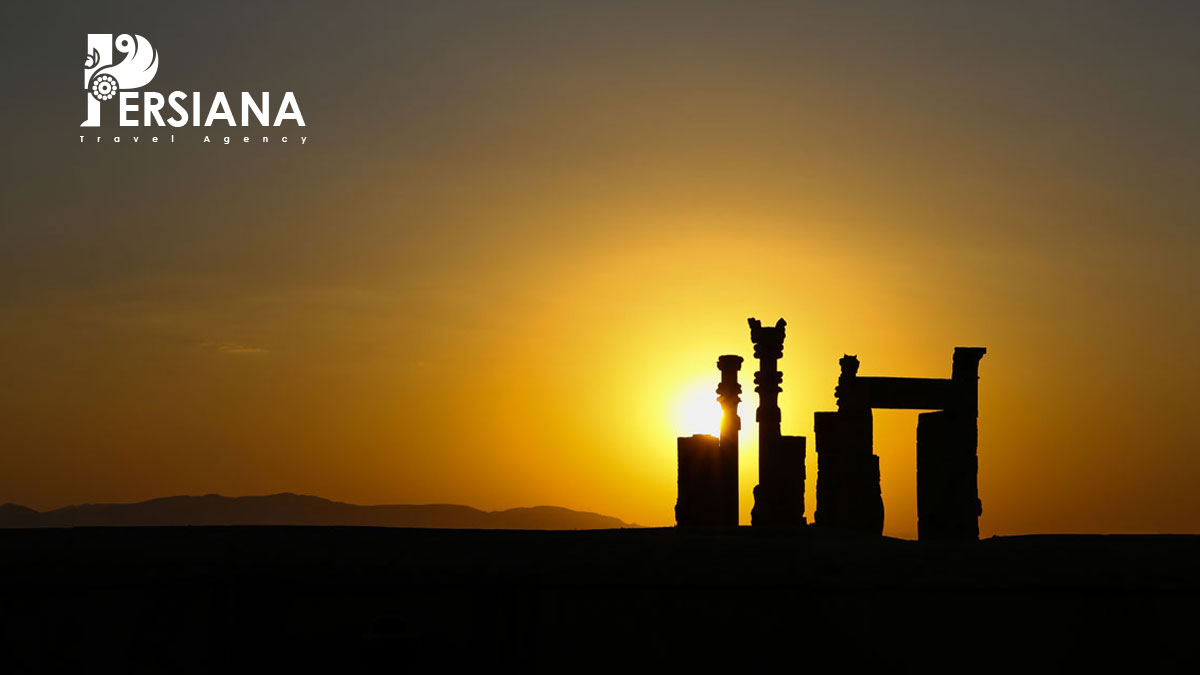 For many years, we have called the ancient building of Marvdasht and its collection of tall columns Persepolis; But the ancient name of the Persepolis is Parseh that it is engraved in an inscription from Xerxes in the gate of all nations and in one of the Elamite tablets discovered from the treasury in Persepolis. Parseh is a name derived from the Persian people who called their state Persia which meant the city of the Persians, the Greeks called it Persis and today we call it Fars.

The Greeks knew little about the city; Probably at that time, due to the national and ritual importance of Persepolis, foreigners could not go there. The remnants of Persepolis are the remnants of the citadel of Parseh, and the Greeks called it Perseus, and the Greek Achilles changed it to “Perseptulis”, which means destroyer of cities and one of the titles of Athena who was considered the goddess of wisdom and war. This phrase later became Persepolis which meant the city of the Persians.

The name gradually found its way into Western books and became widespread all around the world. Today the name of Persepolis transfers to Takht-e Jamshid or throne of Jamshid among Persians. People forgot Persepolis name after the collapse of the Achaemenid empire because they could no longer read the inscriptions. In the Sassanid period, Persepolis was also known as Sad Setoun or hundred columns, which was later changed to forty pillars and forty minarets.

Josfa Barbaro was one of the first Europeans who visited Persepolis and called it forty minarets. It is said that according to Bandesh, the oldest Iranian encyclopedia, the connection of Persepolis to Jamshid belongs to the Sassanid era. Shapoor Shahbazi attributes the naming of Persepolis to throne of Jamshid to the Islamic era. With the forgetting of Achaemenid literature, the name of Persepolis merged with the memory of the legendary kings of Pishdadi and Kiani. Jamshid was a legendary kingdom where magnificent buildings were considered his work. So it was called throne of Jamshid. 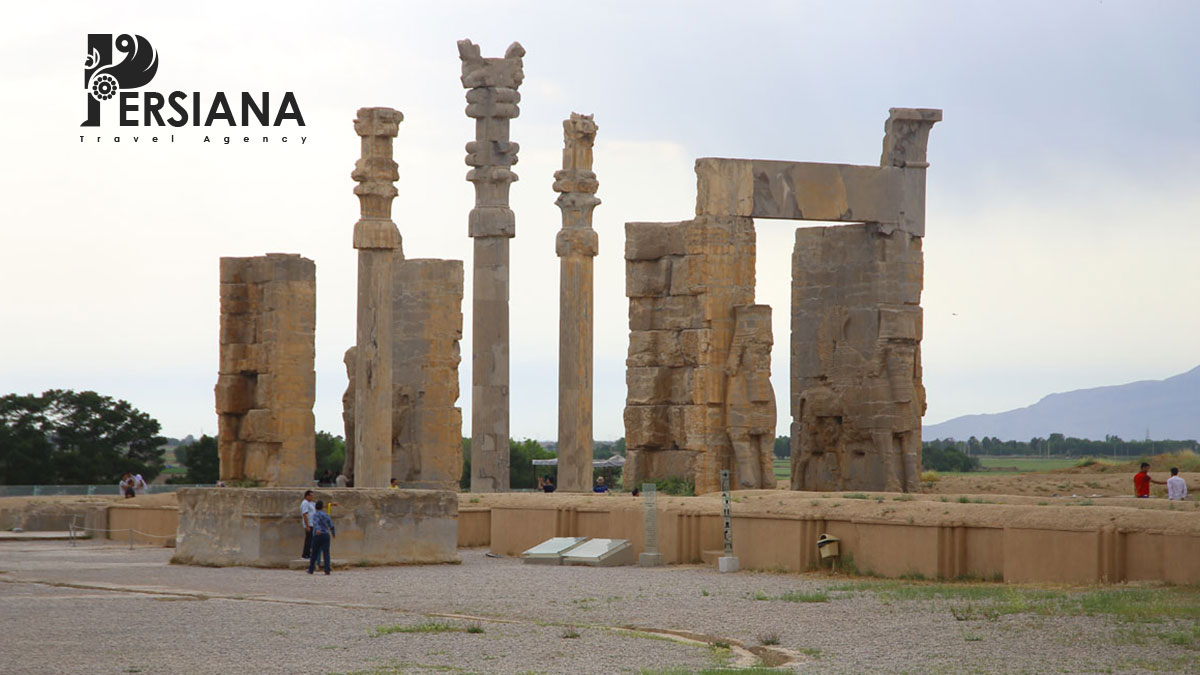 As you get familiar with Persepolis, we want to introduce you the different parts of this historical collection:
The entrance staircase and the gate of the nations: In the northwestern part of Persepolis, two rows of 111 steps with low height (10 cm) are located in front of each other in Persepolis. After going through 111 steps and looking at different designs in Persepolis, we reach the “Gate of all Nations” which is 10 meters high and it seems to be a waiting room.

Apadana is one of the oldest palaces in Persepolis and the largest as well. This palace holds Nowruz celebrations and receive representatives of other countries in Persepolis. Apadana Palace covers an area of ​​12,000 square meters and had 72 stone pillars in the corner of the palace in Persepolis. Today, only 14 of the 72 pillars stand, and many of the sections appear to have been destroyed by a devastating fire in Persepolis.

Palace of a Hundred Pillars

This palace is the second greatest palace in Persepolis with an area of ​​approximately 4,300 square meters. In the central hall of this palace, 100 of 14-meter columns have been used to support the roof, and for this reason, it is considered as “the largest indoor hall in the world”.
Tachar Palace: “Tachar” or “Tachra” is the name of the private palace of Darius the Great in Persepolis, which is located in the southwest of Apadana and its length is 40 meters and its width is 30 meters. It is worth mentioning that the main palace was built by Darius in Persepolis, the porch and the southern stone staircase were built by Xerxes and the western stone staircase by Artaxerxes II.

In the southernmost and the highest part of the Persepolis plateau, there is a palace which is called “Hadish” and was dedicated to Xerxes.
Queen’s Palace: It is situated near Hadish Palace and was built by Xerxes and is located at a lower height than other buildings in Persepolis.

The central palace is a palace with three gates and several corridors with a rectangular appearance that connect the different parts of Persepolis.

One of the most important buildings in Persepolis is the unfinished gate. This large gate is very similar in appearance to the Gate of the Nations.

Another important and valuable part of Persepolis is the treasury building, which has 99 and 100 columns next to a number of rooms, corridors and open courtyards.

Tomb of Artaxerxes II and III

Persepolis or “Parseh” was the name of the ceremonial capital of the kings of the Achaemenid period and its different and extensive architecture depicts the rich history of Iran and the very great ability of Iranian engineers of ancient time. If you want to travel to the ancient world of Persepolis, you could choose one the great tours of Persiana Travel and Tourism Agency to this masterpiece.