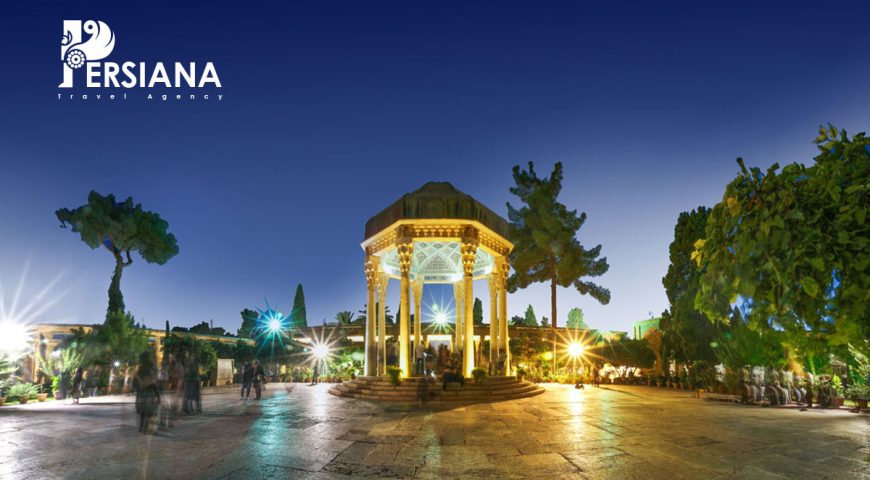 Tomb of Hafez is one of the most important tourist attractions of the beautiful city of Shiraz. This complex hosts many tourists from all over the world every year. In fact, you cannot travel to Shiraz and leave this beautiful city without visiting the Tomb of Hafez. Persiana Travel and Tourism Agency suggests you not miss reading this article.

Tomb of Hafez, the rendezvous of Iranian lovers, is the tomb of the famous Iranian poet. Hafez’s “romantic” and “mystical” poems have had a profound effect on Iranian culture. Hafez’s audience comes to his tomb after 700 years. People put their hand on Hafez’s tombstone and talk to him in this way! “Fortune telling” is one of the famous Iranian customs. When people face with the problems of life, they intend and accidentally recite a poem from Hafez’s divan and find the solution to their problem with the hidden points in that poem. If you want Hafez to comment on the dream you have, when leaving Tomb of Hafez, fortune tellers working in the corners of the tomb can help you with the lovebird that choose one of Hafez’s poems with its beak.

Tomb of Hafez is situated in the north of Shiraz and everyone who walks to Shiraz goes to Tomb of Hafez and spends happy and relaxing hours there. Tomb of Hafez is known as “Hafeziyeh” which means memory. The full name of this poet is Khawaja Shams al-Din Muhammad ibn Baha’eddin Hafez Shirazi, who is called Hafez for short. He was born in 1325 and died in 1390. Hafez, who sang lasting and valuable lyric poems during his lifetime and became one of the world’s famous orators and the great poet of the eighth century of Iran (equivalent to the fourteenth century AD). Hafez is the flag bearer of Persian literature and on the 20th of October is the National Day of Hafez. On this day, not only local poets and mystics, but also Hafez friends and researchers from other parts of the world participate in the commemoration ceremony of him in Tomb of Hafez.

History of Tomb of Hafez 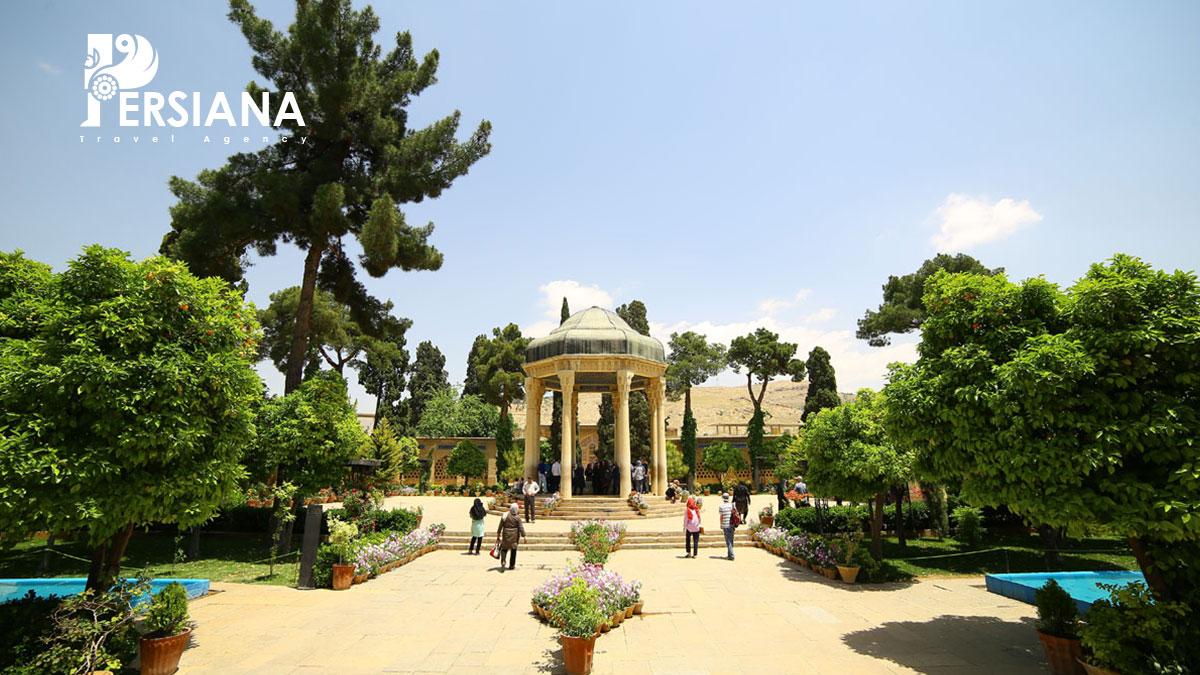 Hafez died in 1390, but the Tomb of Hafez was built for the first time 64 years later, in 1454. The first steps in construction of Tomb of Hafez were taken by a person named “Mohammad Yaghmaei”. Yaghmaei was the minister of Mirza Abolghasem Gurkhani, the ruler of Fars. The original image of Tomb of Hafez was in the form of a dome structure with a large pond in front of it, which was filled by the water flow of Roknabad. With the coming to power of the Safavids and the rule of Shah Abbas, Tomb of Hafez was restored and then with the power of the Afsharians, this restoration was repeated.

But Zandieh went a little further and did not stop at just restoring the Tomb of Hafez. Zandieh built a court with four stone pillars in front of the tomb. The hall had two doors to the north and south, and two rooms were added in these two areas. But these were not all Zandi changes in Tomb of Hafez, adding a lush garden in the courtyard in front of the tomb and placing a marble tombstone were other efforts of the Zandieh government to beautify the Tomb of Hafez. After Zandieh’s rule, Tomb of Hafez underwent changes again. This time, a person named “Tahmasb Mirza Moayed al-Doleh”, who was the ruler of Fars, restored Tomb of Hafez in 1894.

In 1916, a wooden pavilion was built for Tomb of Hafez. This pavilion was built by a person named “Farhad Mirza Motamed Doleh” who was the ruler of Fars at that time. In 1935, a person named “Ali Asghar Hekmat”, the then Minister of Education, with the help of “Andre Godard”, French archaeologist and architect and director general of archeology, built a new and beautiful structure for the Tomb of Hafez. The final changes of Tomb of Hafez were the division of the complex into two parts, north and south, by a porch with twenty stone pillars.

Different parts of Tomb of Hafez 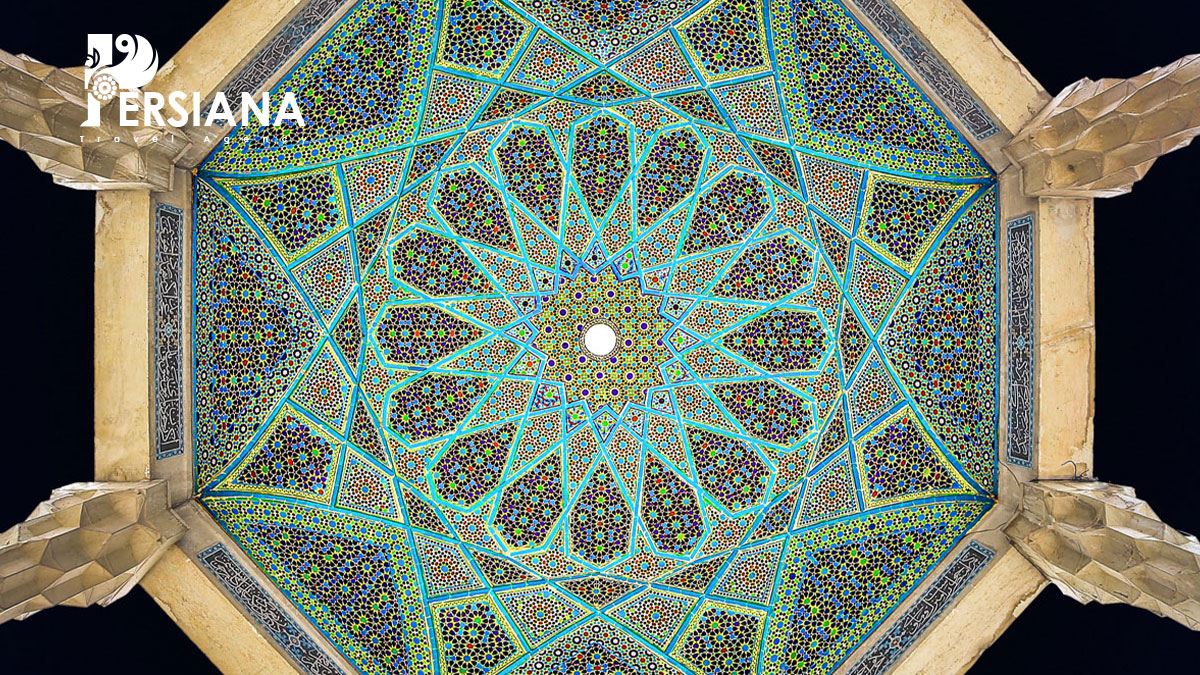 The charm of Tomb of Hafez, in addition to the value of the character resting in this tomb, is combined with the art of Iranian architecture and the greenery and beauty of the garden. Here it is the different parts of tomb of Hafez:

The visit to the Tomb of Hafez begins with its southern courtyard. In the middle of the courtyard, there is a sidewalk with full of flowers and grass, and on both sides of this sidewalk you have to walk to reach the porch of Tomb of Hafez. The porch is separated from the level of the yard by a row of stairs and their difference in level is about 4 meters, which is equal to 18 steps.

You will see a large porch with 20 stone pillars in the middle of Tomb of Hafez, which you can reach through 18 steps from the south courtyard. This hall is about 56 meters long and 8 meters wide. The four columns that were built in this hall during Zandieh’s time are located in the middle of this part in Tomb of Hafez. The hall or the middle porch has divided the Tomb of Hafez into two parts, north and south.

The Tomb of Ghavam Al-Saltanah, an Iranian politician in the past, is located in Tomb of Hafez.

Tomb of Hafez in the northern courtyard

Reaching the northern part of Tomb of Hafez, you can visit to the beautiful and picturesque tomb. The tomb, with five rows of circular stairs, is about one meter high above the ground. Beautiful and carved columns are placed around the Tomb of Hafez and on these columns, the unique green dome stands out. The exterior of the dome is decorated with copper sheets and with 8 columns of 5 meters, they are placed in Tomb of Hafez.

Western courtyard of Tomb of Hafez

The green area with a small pond has made the Tomb of Hafez’s western courtyard so beautiful. In this part of Hafez’s Tomb, the tombs of famous people are located. This section is the burial place of great Iranian writers, poets, scholars, university professors and artists. There are important people resting in Tomb of Hafez, among whom the following people can be mentioned:

Tomb of Hafez is one of the most beautiful tourist attractions of Shiraz which has amazing architecture and romantic vibe with a lush and verdant garden. If you have not visited Tomb of Hafez yet, you can choose one of the Persiana Travel and Tourism Agency’s tour to Shiraz to visit this beautiful place.