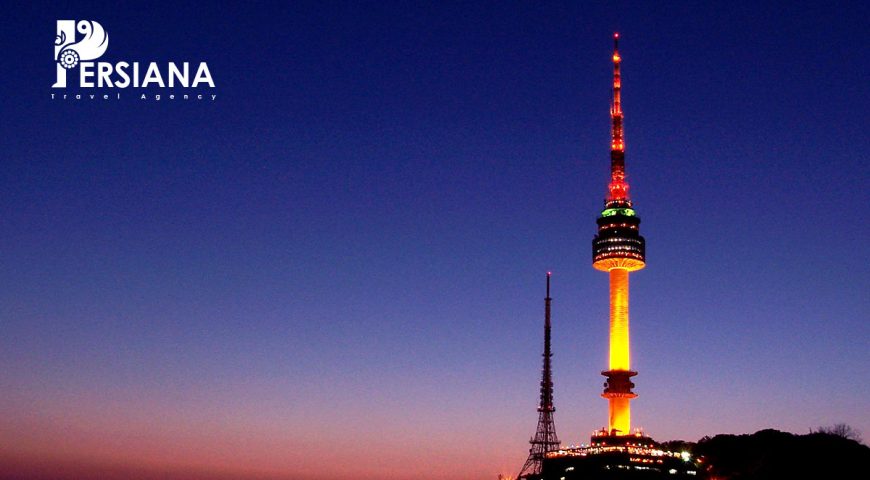 Milad Tower of Tehran is one of the most well-known sights of Tehran and is the sixth tallest telecommunication tower in the world. Today, Milad Tower is known as the symbol of Tehran. In this article, Persiana Travel and Tourism Agency will offer you a comprehensive information about this sight.

For the first time in 1993, due to infrastructure problems in the country’s telecommunications network, the decision was made to establish a telecommunication tower with advanced and acceptable facilities to accelerate wireless communications. For this purpose, prominent Iranian engineers began to study and plan on this project, and finally in 1997, the construction of Milad Tower began on the anniversary of Imam Khomeini’s birth. Milad means birth that is why it was named Milad Tower.

At present, Milad Tower has a wide range of applications in the field of communication in facilitating wireless communication in Tehran, optimizing and expanding the coverage of radio and television frequencies and creating a favorable infrastructure for digital televisions. Milad Tower complex does not only include the structure of the tower, but also includes a large area of ​​the area around Milad Tower like facilities, shopping malls, restaurants, catering services, conference centers, museums and other tourism and entertainment services. Milad Tower has turned into one of the most important sights of Tehran province because mentioned facilities and entertainments.

Six elevators are installed in Milad Tower and along the height of Milad Tower, traffic control cameras and air pollution detection sensors have been installed as well. The building above Milad Tower is known as the top of the tower, which has 12 floors and an area of ​​12,000 square meters. The first two floors are for building facilities and shelters for potential hazards such as fire. From the third floor onwards, there are various entertainment sections, restaurants and museums of Milad Tower.

The eighth and ninth floors of this building are also the location of telecommunication equipment, and another part of Milad Tower facilities is located on the eleventh floor. The highest part of Milad Tower structure has been installed with a 120-meter steel telecommunication tower. The end of the rig on its side is a 16-sided hexagon with a diameter of 6 meters and is 60 cm in diameter square up to the top which was constructed with 350 tons of steel and 30,000 pieces of steel such as bolts and nuts. 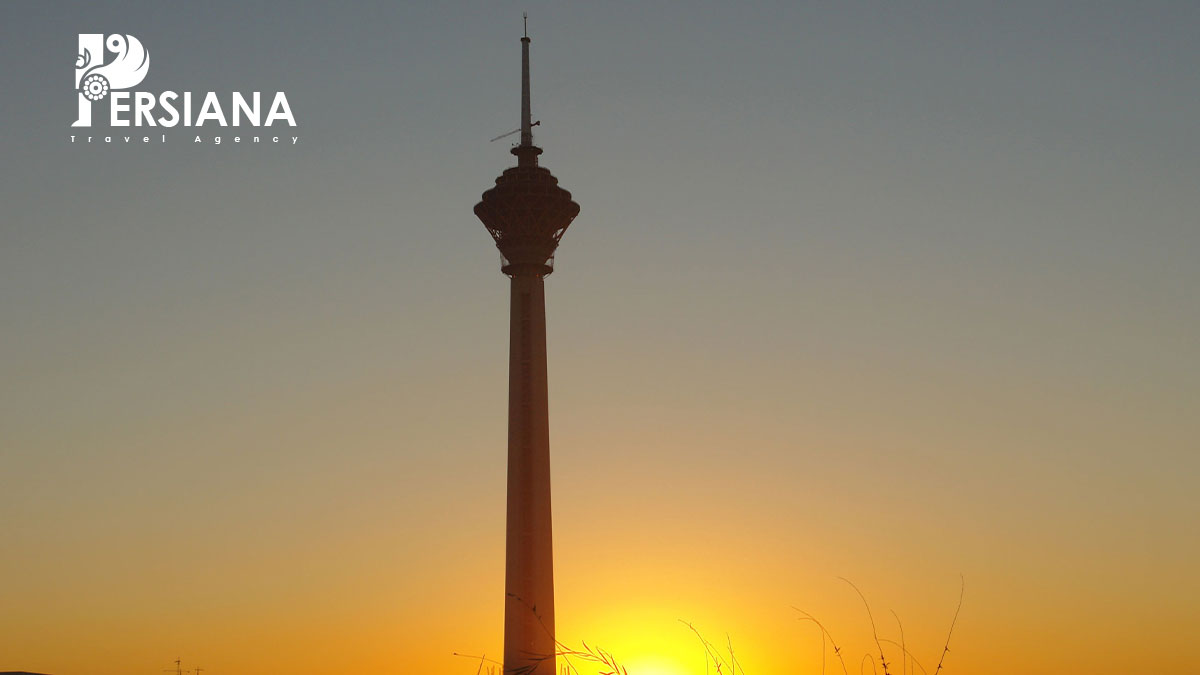 In the Milad Tower of Tehran, different recreational and tourism sections have been installed, some of which are located in the upper part of the tower and another part in the area around the tower. On the third floor of Milad Tower, there is a “closed view platform” and the beautiful view of different views of Tehran. The area of ​​this part is about 880 square meters. Another spectacular attraction on the third floor of Milad Tower is the “Museum of Gifts and Manuscripts of Tehran Municipality”, which is located at a height of 261 meters. In this museum, old Iranian manuscripts and gifts of the municipality of different cities to the municipality of Tehran in different historical periods have been exposed to the public. On the fourth floor of Milad Tower is the “Coin Museum”.

In this museum there are 160 different coins from the historical periods of the Achaemenids, Parthians and Sassanids, which were collected by a personal collector and donated to this museum in Milad Tower. One of the most beautiful parts of this building is the “Museum of Celebrities” at a height of 271 meters on the fifth floor. The Museum of Celebrities includes a collection of sculptures of Iranian celebrities in their actual size. Master Alireza Khaghani has designed and made these works of art with silicone with indescribable elegance. One of the most important parts of Milad Tower that attracts many tourists to the top of this tower is “Milad Tower open view platform”.

This part of Milad Tower is at a height of 280 meters in an area of ​​3000 square meters that surrounds the seventh floor of Milad Tower. In this part, cameras have been placed that, visitors could watch different parts of Tehran. “Milad Tower Sky Dome” is located on the last floor of the building at the top of Milad Tower, in the twelfth floor, at a height of 302 meters. This 13-meters-high dome has special and beautiful architecture. 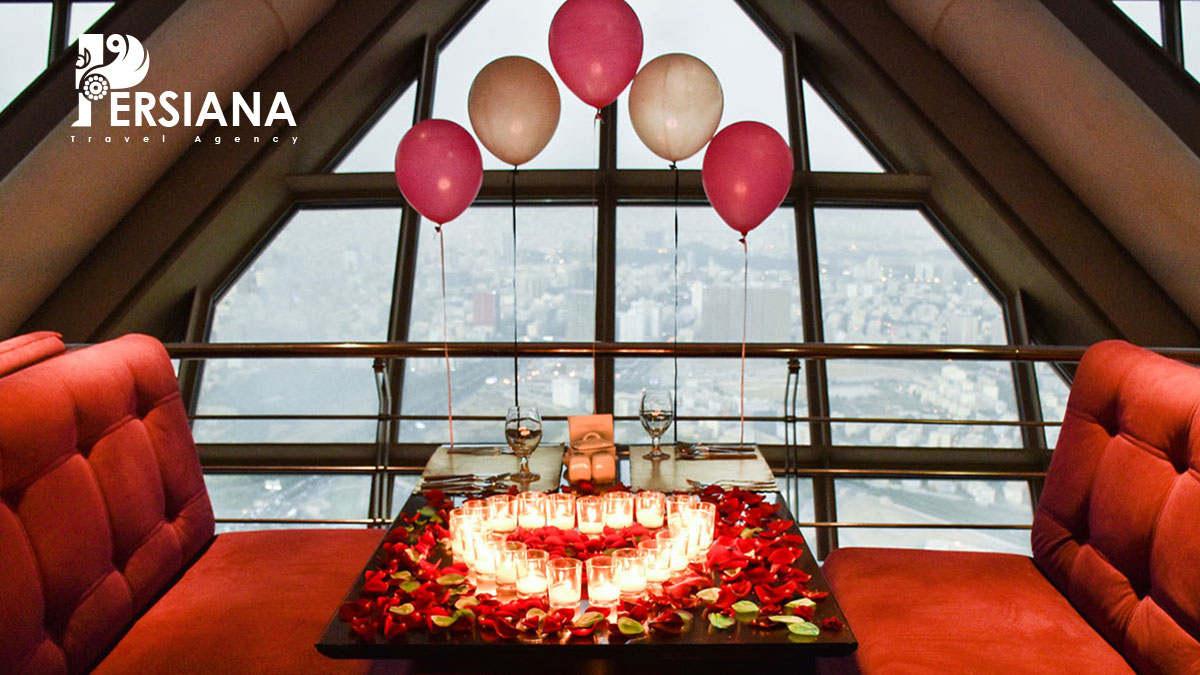 This special restaurant has been designed with special facilities that can only accommodate 100 people. “Milad Tower Special Restaurant” with very beautiful wooden architecture, is used for holding up official ceremonies. Around the special restaurant of Milad Tower, an open space has been installed as well for the guests of this restaurant. On the fourth floor of Milad Tower at the top part of it, the “Viona Cafeteria” is located, which can be called the tallest cafeteria in the world. This cafe is located in an area of ​​680 square meters at a height of 266 meters. Another restaurant in the Milad Tower, is the “Traditional Ivan Restaurant”, which is located in the western part of the complex and on the Nasr Hills.

The traditional food of this restaurant is of high quality and the view of Tehran is very beautiful from Ivan restaurant. “Khorakdeh” restaurant is located on the fourth floor of the lower building of Milad Tower. This restaurant offers a variety of traditional Iranian dishes as well as international dishes such as Italian and Mexican dishes.

In this article, a complete explanation was given about Milad Tower of Tehran by Persiana Travel and Tourism Agency. As Milad Tower is one of the most popular sights of Tehran, we suggest you to include it in your travel plan.