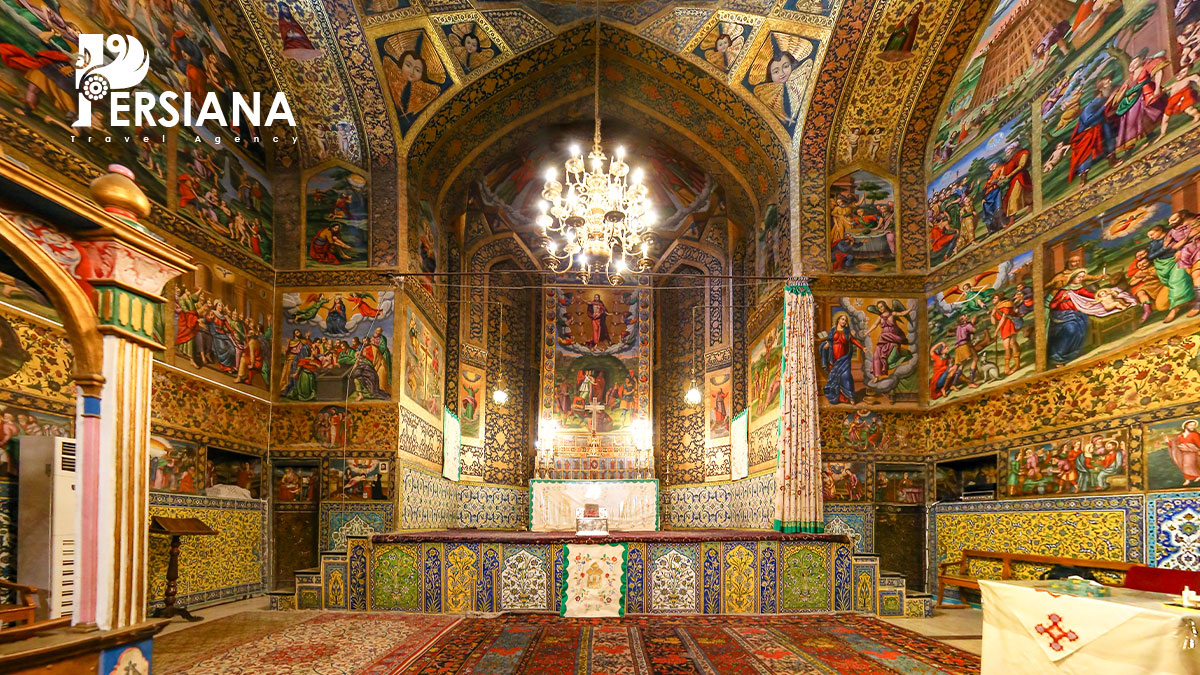 The presence of followers of Christianity in Iran has led to the construction of churches in Iran. One of them is called Vank Cathedral, which is located in Julfa neighborhood of Isfahan and invites you to drink a sip of art, history and peace. Persiana Travel and Tourism Agency suggests you to read this article to get to know Vank Cathedral better.

It is impossible to step into the Julfa neighborhood of Isfahan and not be enchanted by it. It is as if time has gone back and a different atmosphere prevails in the space. According to available information, before the end of the seventeenth century, the city of Isfahan hosted 6 cathedrals; While in the area of ​​New Julfa (modern Julfa neighborhood) there were 24 cathedrals and today only 13 of them remain. Each of these cathedrals has its own characteristics, but in the meantime, Vank Cathedral shines like a jewel in Julfa. The Vank Cathedral, also called San Salvador and the ” Church of the Holy Sisters “, is a cathedral in Isfahan, Iran.

Vank means “monastery” or “convent” in the Armenian language. Vank Cathedral is a historic cathedral dating back to the time of Shah Abbas II, in 1605and  it was extended continuously during 50 years and finally reached to the current form. As the most important cathedral in New Julfa, this cathedral was a center for the training of priests and caliphs and played the role of a Christian seminary. Many monks have grown up here and have reached the highest religious positions.

Today, Vank Cathedral is the center of the caliphate and the center of communication between the Armenians of Isfahan and southern Iran and the world, and has a special place and importance for Armenians. Over time, the Vank Cathedral has seen many historical scenes and today it is known as the largest museum in Isfahan. The library of this collection is one of the most important centers of Armenian studies in the world with its historical documents that have been collected over four hundred years. The beautiful atmosphere of Vank Cathedral is also the eternal home of a number of Armenian elders and this adds to its importance. The unique features of Vank Cathedral have caused its name to be included in the list of national monuments of Iran from December 6, 1961.

The Vank Cathedral includes the monastery, the main church and its courtyard, the bell tower, the library, the museum, the clock tower, the rooms for the bishop’s residence, as well as the meeting halls and the printing press, all of which have an area of ​​8731 square meters. Of this area, 3857 square meters belong to the buildings and the rest belong to the green space and Vank garden.Most of the ancient Armenian cathedrals are built of stone, but Vank Cathedral is built of raw clay.

The outer wall of the Vank is covered with bricks, and in some places, there are tiles painted with winged angels. The walls of the cathedral are 11.75 meters high from the courtyard to the roof of the second floor. The inner wall is covered with plaster and there are eye-catching paintings on it. The Vank Cathedral has two entrances. The main entrance has a large wooden door and is dedicated to the movement of people. At the entrance of this egate, there is an image that shows the view inside the monastery. This image is decorated with azure and gray tiles. After crossing the entrance of Vank Cathedarl, you will enter a corridor with two rooms on either side of it, which was previously used to deal with Armenian affairs, but now, one is used as a small shop and the other as a guard room. The corridor leads you to the entrance stairs.

Vank Cathedral as a Museum of Paintings

The inside of Vank Cathedral is surrounded by a multitude of colors and patterns and paintings. All walls, arches, dome collars, inside the dome and all corners of the cathedral are decorated with oil paintings. Vank Cathedral is one of the few places where you can trace a fine combination of Armenian architectural elements with Islamic architecture. Of the Islamic elements found in the Cathedral, an Iranian dome, Islamic geometrical designs and a corridor with successive arches are the boldest. Most of these paintings depict themes from the Holy Bible. In a part of the Vank Cathedral, images from the birth to the ascension of Jesus Christ can be seen on them, and on a part of the walls, the day of resurrection, the judgment of the day of resurrection and heaven and hell are engraved.

At the cathedral choir, there are four images with globes around them torturing the saints. The images of the place of the hymns belong to Jesus Christ, which begins in the chamber with images of the angel preaching to the Virgin Mary and goes around the whole cathedral. The middle images of Vank Cathedral include the birth of Jesus Christ, the prostration of the three kings to Jesus, the test of Christ by the devil, the last supper of Jesus, the crucifixion and burial of Jesus, the ascension of Jesus, and so on. The inside of the Vank Cathedral, on the north side the images of the resurrection can be seen, above which is the paradise, the entrance of the saved, and at the bottom of the terrible hell with flames of fire, a multi-headed dragon and demons, angels who hang sinners from above. The Vank Cathedral is a unique example among Armenian churches in terms of gilding.

The first feautre that catches your eye as you enter the Vank Cathedral is the bell tower which is located to the right of the entrance staircase. The bell tower is built on three floors above the entrance to the monastery. The presence of a large clock weighing 300 kg on the second floor of the tower has made it known as the clock tower. On the four sides of the tower, four circular clock screens are installed, each of which is 104 cm in diameter. This tower and clock were built by Mardiros Hovnatanyan.

On the right side of the entrance of the Vank Cathedral, a 40 by 53 cm marble inscription is installed and the following text can be seen on it: The tower and its clock were built and donated by Mardiros Gorg Hordanian in 1931 in memory of his late brother who died in 1924. Initially, the cathedral did not have a bell tower, and its first tower was built 38 years after the construction of the main building of Vank Cathedral. Below the tower, there are two tombs, one of which belongs to an Armenian soldier and the other to one of the Armenian leaders. To the right of the bell tower is a large blue inscription surrounded by cross stones.

These stones are called Khach Karm in Armenian and were transferred to this place from the ruined churches of Julfa and installed in this wall. On the roof of the Vank Cathedral, at the top of the entrance and between the western wall and the edge of the small dome of the Vank Cathedral, there is a square-like area in which a small bell tower is built as the second bell tower of the church.

Vank Cathedral became the meeting place of the world of Biblical paintings and the world of lovely domes and the largest and most beautiful cathedral in Isfahan’s Julfa.Don’t miss visiting the historical and amazing Vank with its cool vibe. Persian Travel and Tourism Agency helps you to have the most amazing tour here.