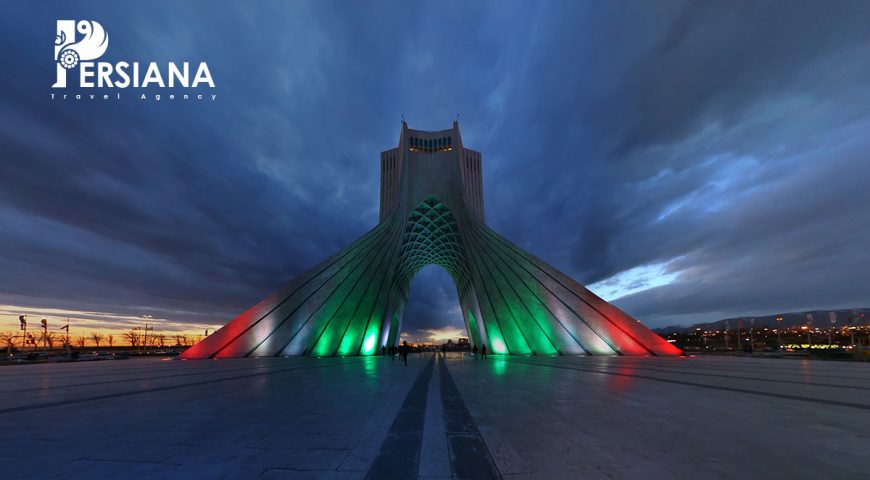 If you want to travel to Tehran you have to enough information about this city. Tehran is the 15th populous city in the world and the most populous city and capital of Iran. In this article Persiana Travel and Tourism Agency gives you a brief introduction about this amazing city.

Tehran is the capital and most populous city of Iran in the north of the country and is located at the foot of the Alborz Mountain range, with an area of 730 square kilometers, which is the 27th largest city in the world. With a population of 13 million, this city is the most populous city in Iran, which has 17.5% of the total population of the country and the population growth of Tehran is 1.4%, which has increased slightly compared to the previous decade.

The Tehran province has 16 counties, 45 cities and 78 villages and is divided into 22 districts and 122 urban districts. Tehran plays an important role in Iran by allocating half of its industrial activities and is known as the center of Iran’s economy. This issue has caused that in addition to leisure trips, a large part of the trips to Tehran, are because of work missions.

The city of Tehran is closer to the northern and central cities of the country due to its geographical location. The closest center of the province to Tehran is Karaj, which is 44 km away from Tehran, followed by Qom with 144 km and Qazvin with 147 km, the closest cities to Tehran. The distance from Tehran to Mashhad is about 898 km, which takes at least 9 hours by car. So, if time is your first priority, it is different. To reach Shiraz from Tehran you have to travel about 935 km by car and about one hour and ten minutes by plane. The distance from Tehran to Isfahan, Yazd and Tabriz is 450, 630 and 631 respectively.

You have land access to Tehran from all cities in Iran and air access from all airports of Iran. For land access to Tehran, apart from using a personal car, you have three other options. The first option is a plane ticket to Tehran, which is a more suitable option for southern and eastern better to think about booking a plane ticket from Tehran to Mashhad and leave the use of private car and bus for shorter routes.

In general, the ways to reach Tehran are cities that are further away from Tehran. The second option is a train ticket, which has a more reasonable price than a plane ticket to Tehran and is very popular with domestic travelers on some routes such as Mashhad, Tehran. It has different prices due to the duration of your trip and it is depending on the origin of your trip. But the last option is a bus ticket to Tehran. If the origin of your trip is a city close to Tehran or you want to have an economic trip to the capital and the time of arrival in Tehran is not so important to you, a bus ticket will be a good option for you. 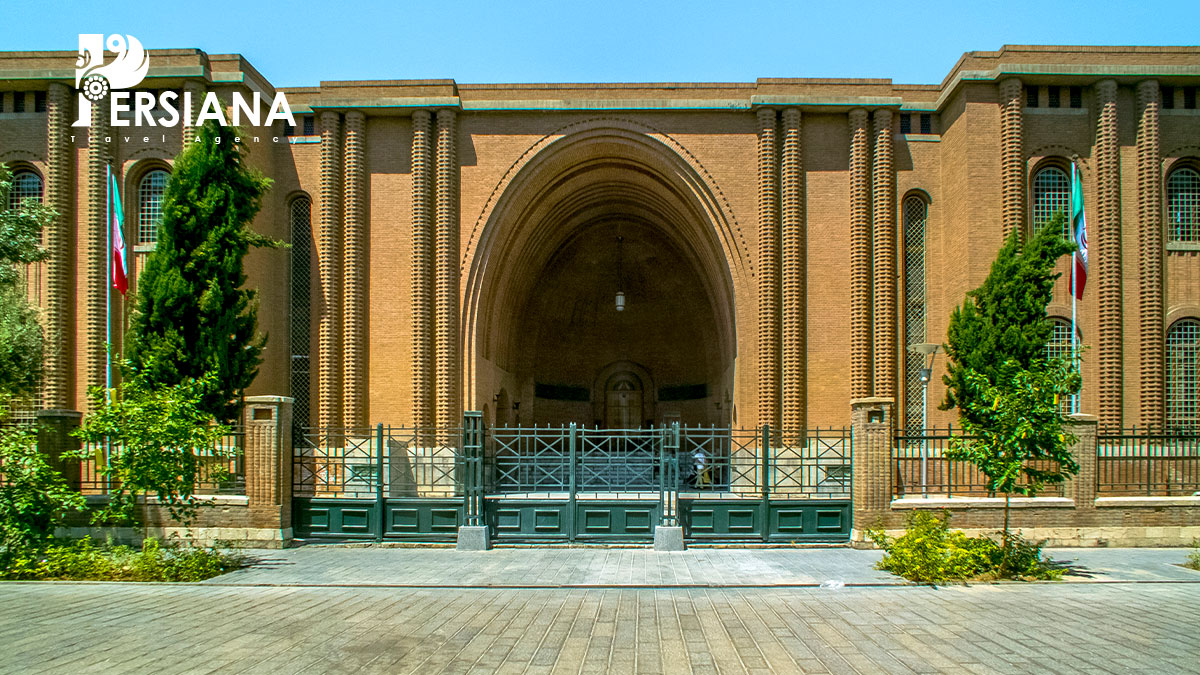 The development of Tehran began with the destruction of Rey. Twice the Mongols attacked Rey and the people fled to the surrounding areas, causing the development of areas such as Tehran. The new period of urbanization in Tehran begins in 1300 AH, which caused rapid growth and dramatic changes. This course is divided into four main sections.

The years between 1300 and 1320 in Iranian calendar (1921-1941), during which all ditches and gates were removed and replaced by boulevards, streets and new buildings such as the railway station, the building of the Ministry of Foreign Affairs, the officers’ club, the officer’s college, the police, the National Bank of Iran. So, the irregular face of Tehran took on a more or less regular and geometric shape. Tehran was first chosen as the capital of Iran about 200 years ago by Agha Mohammad Khan Qajar. Almost all of the old buildings and structures of Tehran belong to the same period or the Safavid era which today are part of the cultural heritage of Iran.

There are several theories about the name of Tehran. One of them is that in the past a group of the Taheri family of Khorasan moved to the current location of Tehran due to lack of water because at that time Tehran was a well-watered village. With the establishment of Taherians in this village, its name was changed to Tehran. Another group believes that because the original core of Tehran village was formed at the foot of the mountain, at that time it was called Teh Ran, meaning the end of the mountain, and after that it changed from Teh Ran to Tehran. The last theory about the origin of the name Tehran states that, in the beginning Tehran was called Gehran. Geh means the warmth and Ran means place. Over time, Gohran became Tehran in various dialects.

Tehran is the largest Persian-speaking city in the world. 98% of Tehranians understand Persian and 10% of them can speak at least one of the common languages in the world. Different ethnic groups such as Persians, Turks, North, Kurds and Lors and live together Tehran. A large percentage of Afghan, Pakistani and Iraqi immigrants also live in Tehran. In the past, the Tehrani dialect was a special dialect of the people of Tehran, which faded and changed over the time. The Tehrani dialect has been in its current form since the Qajar period and is different from the dialect of the natives of Tehran. The old Tehrani dialect still exists in areas such as Shemiran and Damavand. Although it is prone to oblivion. 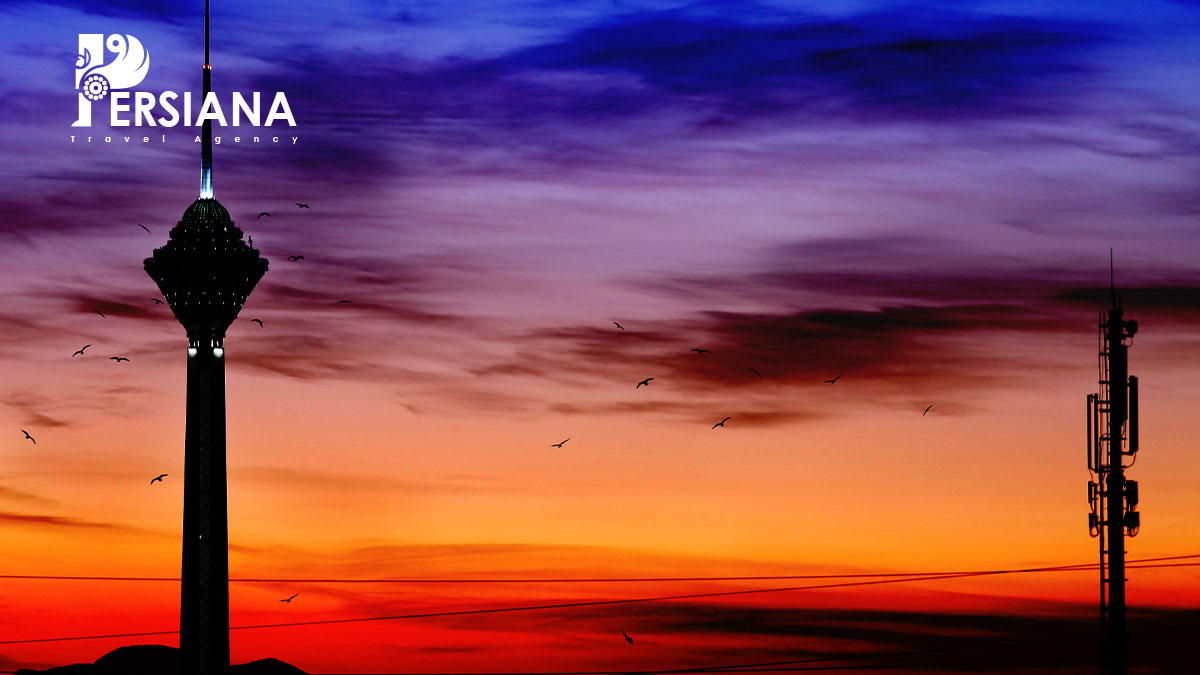 Usually, when the name of Tehran comes up, smoke and crowds, traffic and worries come to your mind. A lively city with its own hustle and bustle that everyone is trying and running to make a living, and you may even forget that you are walking in a city that is one of the top five tourist destinations in Iran. Yes, this smoky capital is full of modern and historical urban attractions, which together make them more attractive. In the following, we want to introduce you to a number of tourist attractions in Tehran.

The most famous sights of Tehran are its splendid palaces that are belong to Qajar and Pahlavi period such as Saad Abad Palace which is the most famous historical sight of the Tehran. One of the famous tourist attractions of Tehran is Golestan Palace which contains an amazing museum. In this palace, you can enjoy the outside space of the palace or visit the scenic parts inside the museum and have a good day.

Another sight of Tehran is the historical complex of Saadabad Palace. You can visit inside the palace and its historical objects, and spend hours outside and enjoy your time. Niavaran Cultural Historic Complex is another amazing palace which also enjoys a great museum with valuable objects. Tehran is also famous for its museums like National Museum of Iran, The National Jewelry Treasury, Negarestan museum, Iranian Artists’ Forum, Tehran Museum of Contemporary Art, Qasr Museum Garden and Reza Abbasi Museum. Tehran also has numerous urban attractions, natural attractions, touristic villages and beautiful nature.

In this article Persiana Travel and Tourism Agency gives basic information about Tehran the capital of Iran, History of Tehran with the introduction of the sights and attractions of it.